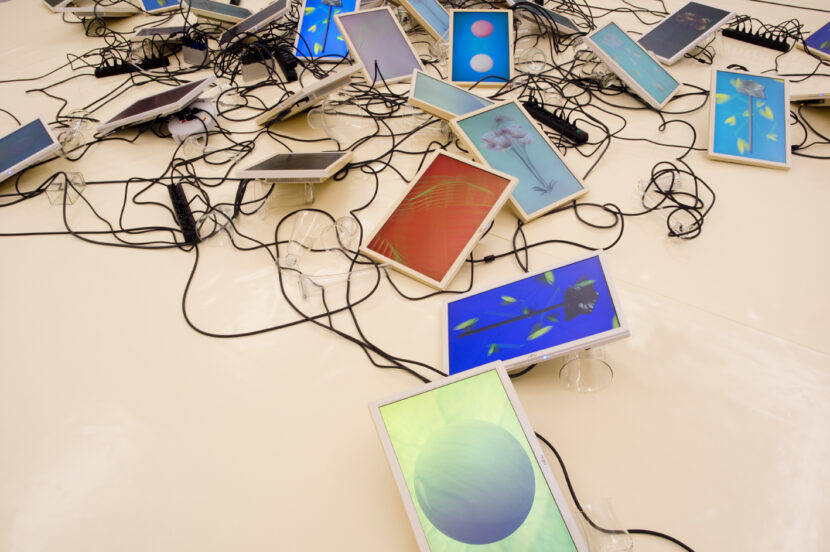 It looks so neatly arranged in a row. It is almost calming: life as a clear sequence to the rhythm of and-then, and-then, and-then. Yet, we all experience that it does not always work that way. The chronology can be shaken up violently: a violent event from the past can overshadow the present, making the future uncertain. Or vice versa: great concerns about the future affect the present, even before those events have taken place. The passage of time is not that straight forward.

Playing with time is loved by film directors. Probably because it is so typical of the medium. As soon as a filmmaker turns on the camera, they make a record of time, which is then cut in the editing room. Flashback, fast forward. Events spanning days, weeks, or even decades fit into a movie of two hours or less.

If you are already cutting time anyway, some directors think it is better to push those limits entirely. Director Christopher Nolan has built a career around this. His most recent science fiction film Tenet is about a futuristic technology that makes it possible to reverse time for specific objects and people. With the help of that technology, people from the future attack us in the present. The descendants want to take revenge because we have made the planet inhabitable for them. Science fiction, of course, but also a wonderful story about how choices we make in the present can have drastic consequences in the future. By reversing time, Nolan shows how closely linked the present, past and future are.

Time shifting is not just for science fiction directors. As early as the sixteenth century, painters had their own elegant way of controlling time. They performed this magic trick through an unexpected genre: the still life of flowers. Although those flower arrangements look realistic, they exceed the limits of what is possible: often, several flowers are in bloom that would never be in bloom in the same season. In the Flower Still Life from 1846 by the Dordrecht painter Sophia de Koningh, for example, the ‘Black Parrot’ tulip (flowering period: March, April) blossoms fraternally next to bergamot (September, October) and hollyhock (June to September).

An impossible bouquet, the seasons were amalgamated by the painter until she had the exact bouquet she was aiming for. You can hardly call this an ode to creation as it is – as the flower still life genre is often interpreted – it is playing God on canvas.

Flash forward to the present: when the Dutch artist Akmar was given the opportunity to make a work of art for the large hall of the Pictura stage for contemporary art in Dordrecht (the continuation of the ‘Pictura drawing society’, the artists’ association where Sophia de Koningh was refused over a century ago because she was a woman), she returned to this old game with impossible flower bouquets. Akmar’s installation Vanitas (2020) consists of a floor full of skewed and tilted screens. On it, digital 3D models of flowers spin gracefully in circles. The big difference with the sixteenth century: her flowers do not depend on the seasons, but on different types of software that have been used for this in recent decades, such as Plant Studio, Google Sketchup, Maya, 3DS-max, the popular computer game Minecraft, or most recently, Cinema 4D.

Akmar collected ready-to-use 3D models of flowers, delved into the archives to get them working again on software that was sometimes decades old and now presents them as one digital ornamental field of flowers; virtual flowers that could never have existed simultaneously.

The result is alienating and enchanting. The colourful flowers flow gracefully across the LCD screens – their physical ‘vase’. The black power and video cables connecting the screens meander between them, like the jagged branches of wild bushes. In between are glass vases, with a number of screens resting on them, a subtle reminder of the time when flowers were still organic.

Rough and pixelated, created with just a few lines or smooth and realistic in high resolution: the design of the digital flowers reveals something about the development of technology in recent decades. The most modern flowers are not necessarily the most beautiful.

Akmar’s play with time is given an added dimension in the screens she uses: old, slightly yellowed models from a German office building. Their position in relation to the window determined the way they are now discoloured. The longer the screens were in the sun before, the more yellow they now look. The passage of time is stored in both the digital and physical material.

How time twists and turns is an important theme for Akmar. In the same room where Vanitas is making its debut, a modern 3D printer is purring in an antique wooden niche. During the exhibition, this printer delivers one physical copy of a digital 3D model of a tulip every day. By changing the settings a little bit every day (for example the print speed, or by tilting the model), no tulip is the same. As with the yellowed screens, here the passage of time is given a place in the physical material. In the act, the moment passes. The French philosopher Merleau-Ponty called all painting ‘congealed movement’ because the painter ‘uses his body’ and the canvas is always the result of a physical act in time. The human hand seems absent here, but the time that the 3D printer has put into work becomes particularly tangible due to the various visible deviations.

Series 1 SQM of Old News (2019-2020) is exhibited around the Vanitas virtual flower field. To this end, the artist processed the paper from four to five months of daily newspapers into wall sculptures of exactly one square metre. The dried paper pulp has cracked in several places, as if you are looking at a cross-section of the earth’s layers. Like an archaeologist you want to research it, looking for the long-forgotten breaking news. 1 SQM or Old News is a subtle commentary on the transience of the news, but above all an exciting insight: time is also stored in concrete terms in this material. By presenting it as a square metre, Akmar asks the question: what format should you use for the physical passage of time?

The digital flower models, the yellowed screens, the 3D prints of a tulip and the pulped newspaper stacks prove that time can be accumulated in physical material. But the reverse is also possible: collecting time by scraping away the material. Akmar’s Sandpaper series consists of a series of used sandpaper sheets, which are displayed as if they were abstract expressionist colour field paintings. Between the rough structure of the sandpaper, you can see the traces of an object that has been sanded with it. The natural decay to which everything is subject has been accelerated by sanding. It makes one question: what was sanded here? How long? When? Why? The traces, the grit of an unknown object, are stored in the sanding tool as a mysterious sediment.

In the same room where this series of explorations of time as physical material take place, a thin link chain, made of 18-carat gold, is suspended from the ceiling. The chain on the ceiling is so thin that you can hardly see it. The chain, the beginning of the 7.5-metre long work Chainlink (2018), changes into slightly thicker silver, even thicker nickel, and further down in stainless steel, plastic, until there is a thick steel link chain at the very end. They are connected as linked moments. A powerful representation of how what seems to have nothing to do with each other (a gold chain and an industrial steel connection) can still be connected.

With her impossible digital bouquets, the repetition of an old art-historical tradition, the 3D-printed flowers, the layers of news and the acceleration of natural decay in sandpaper, Akmar shows how agile the artist can use time as an instrument. She shows how time stores itself in material, leaves tangible traces in the things around us. It is flashback, fast forward in physical material. It is science fiction, but in real life. Akmar’s art shows that playing with time is not only self-evident for filmmakers, but that the passage of time is also expressed in the basic material for visual artists: physical material. Because that physical material is ultimately the building blocks that make up everything around us – including ourselves – her art is all the more poignant. The whole world appears to be made up of impossible bouquets